Why study in Cracow?

Cracow is a main city and one of the top tourist destination in the southern Poland. The city has a rich tradition as an academic, business and cultural center. The city has a number of national heritage facilities – hundreds of historical buildings and ancient monuments. It’s also very well prospering economically as it is placed at the crossroads of Europe.

The convenient geographical location of Cracow – on the crossroads of the most important Polish and European transit routes (Frankfurt – Kyiv) certainly enhances the development of modern technologies.

The city possesses an efficient and modern municipal transportation network and an airport with a wide range of connections which services over 5.8 million passengers per year. Planned investments in the infrastructure and communication, which will make it possible to expand the network of passenger and cargo transportation, are another advantage for investors. The economic development of the region may also be measured with the help of the number of business visits, which in recent years have tripled.

Lesser Poland is one of the most dynamic business regions in Europe, which is confirmed by the fact that it was awarded the prize of the European Entrepreneurial Region 2016 by the European Committee of the Regions. According to the latest report by the Municipality of Cracow (State of the City Report for 2016), it is the human potential and closeness to the world that permitted Cracow to become the best European location for the sector of modern services.

Cracow has become one of the most important entrepreneurial centers in Poland, thus offering the growth opportunity to start-ups based on knowledge, modern technologies and innovative solutions. Highly qualified personnel educated at Cracow universities make Cracow an attractive city for investors, who open here research-development centers of their companies, e.g.:

Almost 70,000 people are employed in the outsourcing sector in Cracow, and therefore it is the most important center of business services in Central and Eastern Europe, and ranks 8th globally in the Tholons Services Globalization Index 2017.

Cracow is situated very close to other equally dynamically developing economic zones where multinational corporations invest, e.g. Mabuchi Motor, a Japanese producer of motor components who will invest as much as 360 million PLN in Bochnia, thus creating 400 new jobs.

Cracow is the most academic city in Poland and more than 200,000 students, that is 1/5 of the inhabitants, are young and ambitious people. More than 10,000 people from all over Poland, Europe and the world begin studies in the capital of Lesser Poland region annually, which confirms a huge scientific potential of the city as well as unusual reputation and tradition of education

The capital of Lesser Poland is a perfect conference hub which, due to fantastic surroundings, attracts organizers of meetings and conferences from all over the world. 500 events of this type take place here annually.

The capital of Lesser Poland region is also a European cultural center which in the year 2000 received the title of the European Capital of Culture, and is the most visited city in Poland by both Polish and foreign tourists.

Cracow won the seventh position out of 66 cities in the ranking Europolis 2018 Ranking: Civic Participation, which was prepared by the Schuman Foundation and the Insight Center for Policy Analysis.  This means that Cracow is a city 'involving residents in decision-making and building the space for agreement between local government authorities, business, science and civic society'.

In the latest ranking of one hundred most visited cities around the world (Top 100 City Destination 2018 Ranking), carried out by the Euromonitor International  market research agency, Cracow ranked 75th, and with over 2.9 million tourists scored better than cities such as: Rio de Janeiro, Buenos Aires, or Melbourne.

Cracow School of Business CUE does not provide a dormitory, but recommend the private dormitory near the University
– Unibase (click to dowload the brochure).

In the four-story building with an area of almost 4,400 sqm, there are 158 rooms ready to welcome 347 students. The Unibase Academy is located at Koszykarska 33, in Płaszów. This area is part of the fashionable Podgórze district – an extremely dynamically developing area of Cracow. It takes only a quarter of an hour to get to the Vistula Boulevards, a popular place for walks and jogging. There are plenty of green areas in the surroundings, ideal for walking or cycling. The Płaszów Garden next to the dormitory park is perfectly suited for picnics and learning “under the sky”.

The nearest bus stop (Koszykarska) is 300 meters away. Commuting to the centre of Cracow takes only 30 min by public transport.

You can choose to live in single, double or three-person rooms, if you prefer company. The rooms are equipped in pillows and quilts as well as bed linen and towels, which are changed every two weeks. Rent includes: water, electricity, heating, unlimited internet, 24h security and monitoring, laundry and change of bed linen, laundry and change towels, common areas cleaning, bathroom cleaning with your permission.

We offer 11 shared kitchens equipped with modern household appliances. To facilitate your everyday life, we have also prepared a self-service laundry room. On the ground floor, there is a room for leisure with large ULTRA HD TV allowing you to enjoy your favourite series in 4K resolution. The dormitory has a photocopier, as well as a small library with free access to books. We also provide unlimited access to high-speed internet for everyone; this will facilitate learning and ensure constant contact with the world. In front of the building, there is a parking lot with a bicycle parking space. 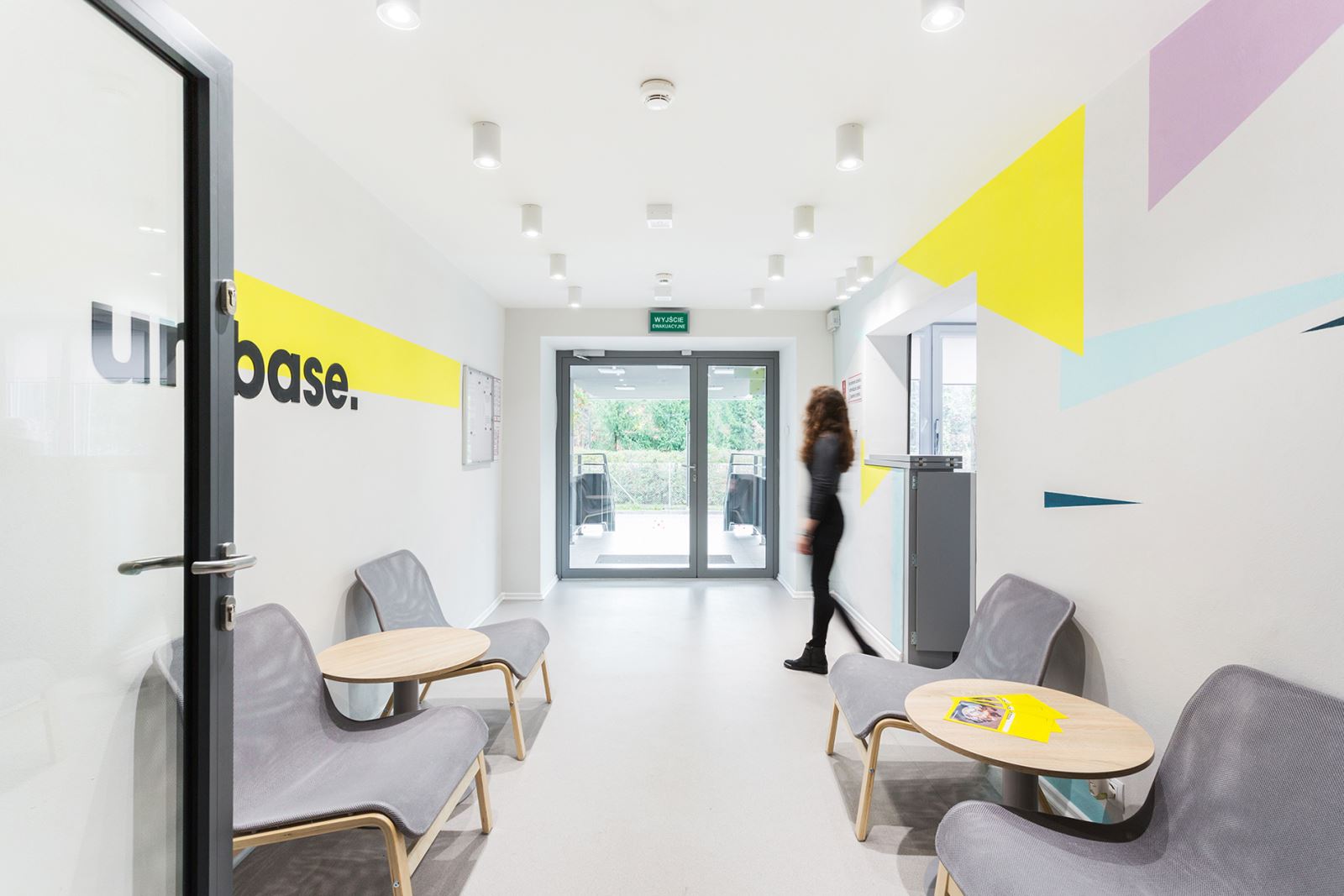 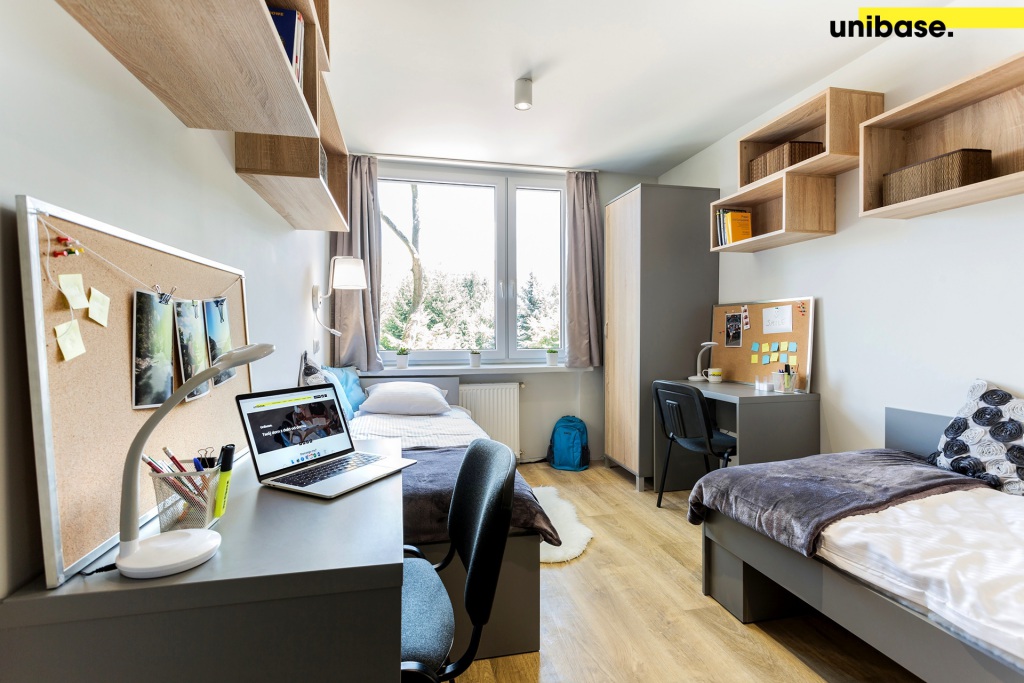